Sandra Ross sent me copies of 2 books that she arranged to have published after the death of her husband, Edward S Ross a few years ago.

Any Californian entomologist my age who visited the California Academy of Sciences in San Francisco would know Ed Ross. He was an icon of the Academy. In the "old" Academy, his office was strategically placed so that all visitors to the department had to go past his open door. If he was there, and he usually was, you had to stop and "there went the morning"!

Ed was born in the state of Washington and was a superb artist as well as a biologist. He moved to the Bay Area and did all of his graduate work at UC Berkeley. At the time that the Entomology Division was impressive with many scientists doing research in many diverse fields of entomology. Following this period, Ed joined the US Army and was sent to the Pacific where he was involved with mosquito control. There he began a career of extraordinary insect collecting. How he managed to collect thousands of insect specimens from war zones and prepare them for the Academy collection is amazing. Those specimens are all in the CAS and many have become types of new species. Ed was a pioneer in the design of appropriate field vehicles. See the several he designed in his autobiography: https://www.annualreviews.org/doi/10.1146/annurev.ento.53.103106.093338 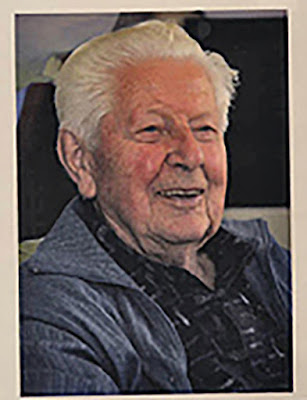 But I digress. I first met Dr Ross when I was about 12 yrs old when my father took me up to the Dept of Entomology on the suggestion of Bob Dempster who was in the Ichthyology Dept. He and my father and my uncles were all members of the San Francisco Aquarium Society. We always had aquaria around the house and I still maintain that hobby. At that meeting my father told Ed that I had a more than average interest in insects and what should we do about it? Ed said we will put him to work now. I then joined Paul Opler and another fellow transferring butterflies in envelops into more permanent accommodation in the collection. Paul and I have remained friends over the years but have not seen each other for several decades.

Ed became very influential in my life. He suggested to my mother that I should take up photography and that I should start out at "a professional level". No cheap cameras for me! My first camera was and Ashahi-Pentax with a close-up lens.

I have always been attracted to orthopteroid insects. This I attribute to my grandmother who used to collect with me at our summer place in Rio Nido, north of San Francisco. She made my first insect net from a "landing net" she had for fishing. I recall is had a collapsable rim and an extension that allowed me to get to the Tiger Swallowtails that were high in the mulberry bushes. It was also useful in netting the Platylyra katydids that landed on the house, attracted to the lights.

The attraction of orthopteroid insects was nurtured at the Academy by the array of US and foreign specimens Ed had collected. Ed once remarked on his way out the4 door on one of his many collecting trips in South America,  that he wished someone would take up the study of the Orthoptera. So with the aid of Don MacNeill and Jacques Helfer I began to study Orthoptera in earnest. That's where it all began.

When I was about 13 Ed's classic book, Insects Close Up came out. 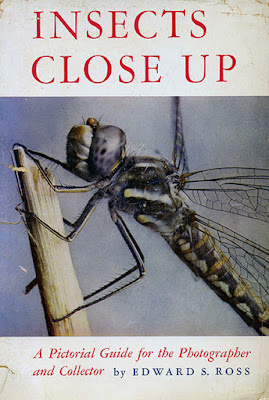 My very worn copy of the book. Later when he visited Australia, he autographed it. 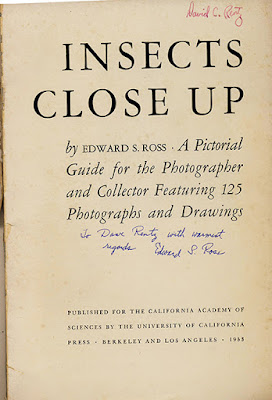 This book was destined to become a classic. It was one of the first that dealt with insect photography. He had wonderful material, mostly local Californian species, and he had sections on how to photograph them and make a collection. And remember, he made photographs the hard way. His black and whites were developed in the dark room at home or at the Academy. All the colour material was made with Kodachrome film. He was convinced that Kodachrome was the best film ever made. As a result I never took a photo with anything else. He did not like the colours in Ektachrome, so I never used it. As for the others, well we never used them. Those old Kodachrome slides survive to this day. About 20 years ago I was involved with make a CD-Rom, "Insects-A World of Diversity". I included a photo of a skipper he had taken more than 50 years prior. The colours were just as the should have been- and this was before Photo Shop! (Another aside! in looking through Insects Close Up I see on p. 70 in his photo of a collection, a katydid that I later described. Neduba extincta is just below the "Orthoptera" label. )

Ed was aware of the "digital generation" that was rapidly approaching. But as far as I am aware he stayed away from it saying he was just "too old" to take it on. But he knew it was the way of the future and photography would never be the same as he knew it. 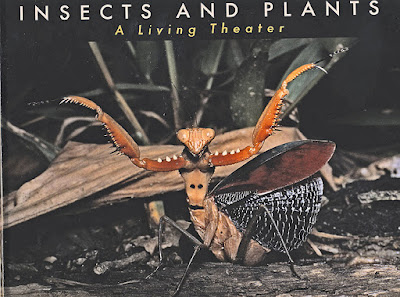 Insects and Plants is a wonderful pictorial adventure illustrating the wide range of insects, their habits and their role in the scheme of things. Western US entomologists will recognise many of the photos having seen them in any of the many talks Ed gave to the Pacific Coast Entomological Society, the California Academy of Sciences and the Explorer's Club of San Francisco. I recall many Saturday afternoons at the Academy where Ed was featured showing slides of his recent trip to the Amazon, Africa or India. The our talk always lasted twice that long with many asides and to overflow audiences.

Ed trips lasted for months. He usually went off salary but was supported by the National Geographic, Explorer's Club as well as wealthy friends like Van Davis. I recall accompanying him down to the docks on SF Bay where he picked up his field vehicle returning from India. I can still remember that "odd smell" on the ship which was from the tons of copra that was being imported for processing. The main stated purpose of all his trips was to survey for the Embioptera--the web-spinning insects. These insects occur on tree trunks or under rocks. It did not matter if Ed collected many or few specimens. He developed a way of rearing the insects so that a few or even a few eggs would develop into a colony of hundreds of individuals. He collected samples of the webbing which inevitably contained eggs. He would tease the webbing into vials which would be sent by air back to the Cal Academy where the redoubtable, ever-faithful Peter Rubtzoff, would put them into culture. They discovered that dried leaves of the California Live Oak, Quercus agrifolia, was the perfect growth medium for the web-spinners. They thrived on it. Thousands of cultures were maintained and harvested at the Academy over the years. On all of his trips, a young entomologist accompanied Ed with the sole purpose of collecting insects. The result is hundreds of thousands of insect specimens in the CAS collection, many destined to become types. Visitors were invited to "go collecting" amongst the thousands of unmounted specimens.

Insects and Plants uses Ed's wonderful photographs to illustrate many aspects of insect ecology in a way that has not been done before. And this was in the era before digital photography so everything had to done correctly or there was no result. It was not easy to have film developed in some the places Ed & Sandy visited. But somehow he got it right! 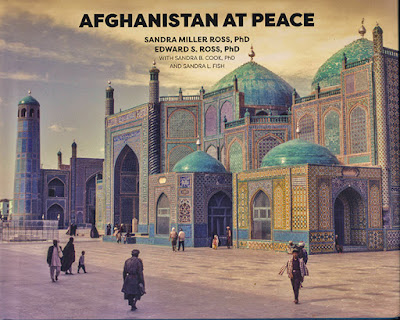 Ed always had an interest in the cultures of the people in the countries he visited. He envisaged a major treatise on the many peoples he photographed. He provided National Geographic and other major publications with articles and beautiful photographs.

In 1970 Ed and Sandra Ross visited Afghanistan. Even though the country had been invaded for hundreds of years, this was a time of relative peace. Afghanistan at Peace is the result. His and Sandra's photos reveal what a wonderful place it was before all the bombing. You can tell from the photos that the people seemed happy and productive. The landscapes and monuments are spectacular to say the least. The photos (mostly of men because women should not be photographed) capture the serenity of a poor but beautiful country. This is an account of what it was in the 70's in Afghanistan. Who would have known what was to come?

Wonderful post, Dave. How well we remember Ed Ross!. . . an unforgettable character and a man who knew how to get things done. I can still see him in his blue dress shirt and red tie up in the Cal Academy's old entomology range.

That's exactly how he was. In the field a brown khaki shirt and trousers.
D

Nice post! Its really interesting. The ideas were good and helpful to us.
VOIP Services in India
VOIP Providers
IVR Call Center Software

Good article. Such good reviews andsuggest you so warmly told the story of man. Loving your job and devoting your life to it deserves great respect. It was interesting to read.