You Ning Su and I are writing a guidebook to Australian crickets (in the narrow sense). We are gathering photos and information and have been doing so for the past couple of years. We expect the project to be completed late in 2017 with publication in the following year.  We are happy to receive any photos of Australian crickets. If they are selected to be in the book, the photographer will receive a gratis copy of the book in exchange for the use of the photograph.

The Australian Tree Crickets are known from in two genera, Oecanthus and Xabea. The former is a world-wide genus occurring in tropical and subtropical regions. Xabea has a much more limited distribution. It is found mostly in the old World tropics. Both are nocturnal in their habits.

In Australia, Xabea is represented by four species all of which are found in north Queensland, especially along the coast in the rainforest. They are distinctive in colour and pattern and very different from Oecanthus in having clasping cerci in both sexes.

We have covered the strange habit of X. atalaia in this blog before. http://bunyipco.blogspot.com.au/search?q=Xabea. Xabea species inhabit the understory where they live on the undersides of leaves in small populations.

Oecanthus is known in Australia from three species. Both O. rufescens and O. angustus are widespread across most of the country. O. adyeri has been found only in the Kimberley region of Western Australia. All occur in grasses, often along the margins of mixed forests. Males produce loud continuous or broken songs. Several males sing for a while in one place and then move on to other sites, seemingly as a group.

Concentrated collecting has not produced any additional species of either genus. 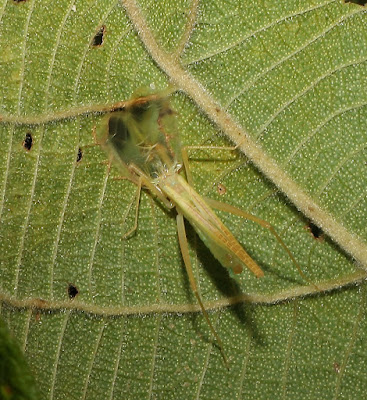 A male X. atalaia Otte and Alexander with his head inserted through a hole in the leaf (the hole not made by him) and the leaf apparently serving as an amplifier. (See the link above)

Head and thorax of a male of X. atalaia. Two of the species of Xabea have very colourful and distinctively marked heads and thoraxes. 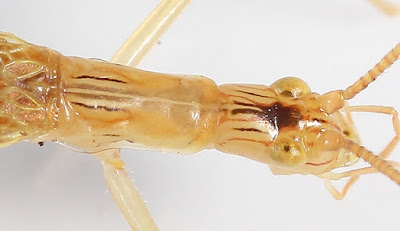 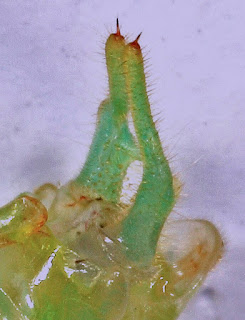 The clasping cerci of a male of X. atalaia. 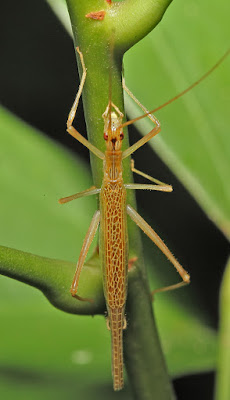 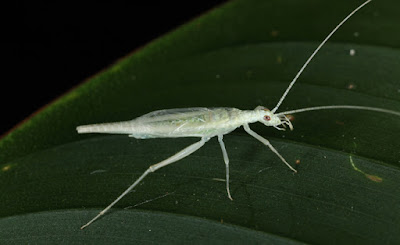 Male of X.tumbarumba. This species has a greenish tinge. 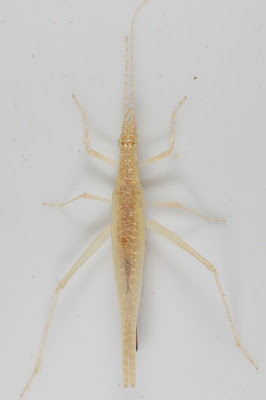 X. wyebo Otte and Alexander, a rather plain species with a sculptured head and pronotum. See below. 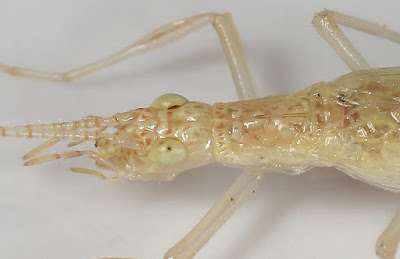 Male Oecanthus angustus Chopard. This species usually lacks dark markings on the sides of the tegmina and in the middle of the abdomen. The basal joints of the antennae are unmarked in Australian Oecanthus. This is quite different from the North American species where antennal markings are distinctive of the species. 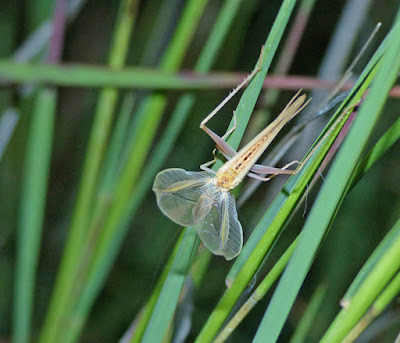 Singing male of O. rufescens Chopard. Note the stripe on the middle of the abdomen.

Female O. rufescens. Note the brown stripe on the sides of the tegmina.
Posted by Mr. Smiley at 16:01:00

I was just made aware of this blog. I'll post the link in the Tree Cricket Appreciation Group page on Facebook. GREAT photos. Nancy Collins