Squatter Pigeon, An Unusual Find in A Rainforest 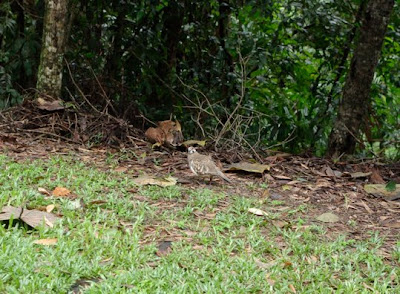 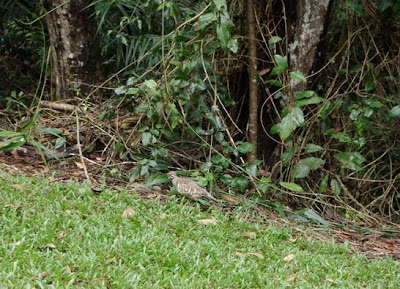 The Squatter Pigeon, Geophaps scripta is nomally a bird of the inland arid country. Yesterday, I saw a small pigeon running about our place. It was reluctant to fly and I thought it might be a young bird of a local species. But I did not look closely to make a positive identification. This morning our neighbour, Gillian, came by to ask if we wanted to see something really rare. It was up on our lawn. And there it was, the same bird as yesterday. It was busy with searching for seeds in the lawn and was fairly easy to approach and identify.

The Squatter Pigeon is aptly named. The birds are reluctant to fly and are easily captured or shot. The early settlers were soon to discover this behaviour and hunted them relentlessly. This and the destruction of their habitat for agriculture has probably led to their vulnerable status.

But how did this bird get to the rainforest, especially if it is so reluctant to fly? Well it may be an escape from an aviary or was just off course. Who knows? There are populations in grassland country around Mareeba. The reddish ring around the eye indicates it is a local, a member of the northern population of this species. So maybe it is just off course but it's a long walk to Mareeba!
With its bumbling ways, it would seem to be a “sitting duck” for a goanna or a snake so its days in the Kuranda rainforest may be limited. 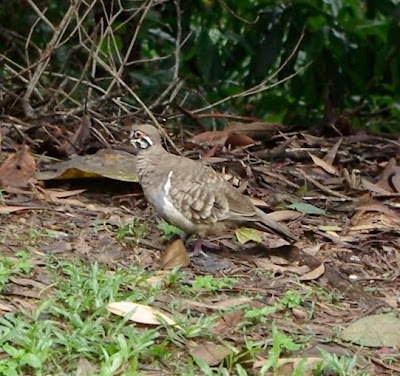 Great, and surely a very odd habitat. They are found in the drier sclerophyll forest as near as Koah, so the odd wanderer clearly strays further east
Phil Gregory
Cassowary House Black Mountain Road