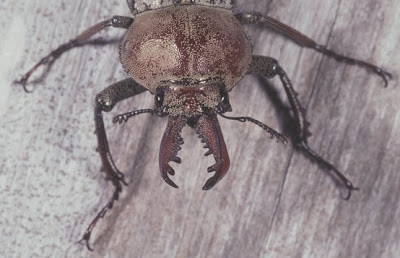 Each morning there is an array of beetles of many species at the light sheet. The species component varies with the season and flowering and fruiting of the vegetation. As with all insects, each has a particular biological story. Many we are yet to unravel. Here are a few highlights.

Many scarabs come to the lights, some apparently from great distances. Here we have the Grey-backed Cane Beetle. This large scarab is a pest of sugar cane and is responsible for the intrduction of Australia's greatest pest since the introduction of the "white"man', the Cane Toad, Bufo marinus. This beetle attacks sugar cane from beneath. The grubs feed on the roots causing considerable damage to the crops. Cane toads would never encounter the grubs since they only burrow in the colder months to sleep. They would only encounter the adults on a chance basis since the adults are airborne most of the time and seldom come to ground. In general, one of the least likely places you would encounter a Cane Toad would be in a cane field. They avoid dense plantings. This is true to some extent o the rainforests. They only occur there when times are tough and food is scarce. Normally you would not encounter Cane Toads in rainforests. 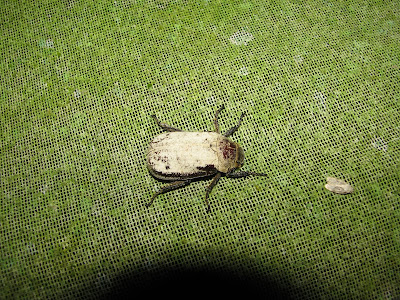 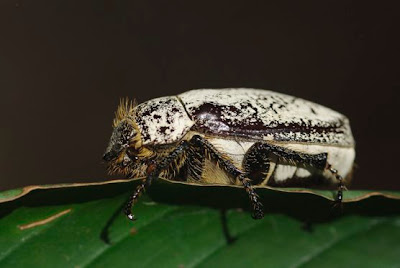 Green scarabs, like this one, Anoplognathus punctulatus, are frequently found on the light sheet. Interestingly, they are not picked off by the several species of birds that arrive every morning at day break for their breakfast. Are they distasteful? Or is the search image on the sheet one that the birds just don't recognize? 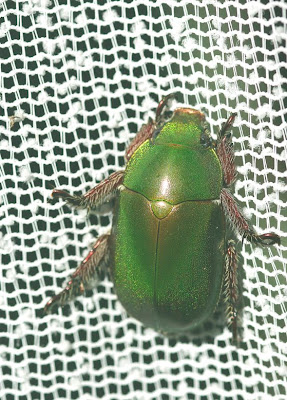 One of a number of green scarabs found at lights in the wet season. 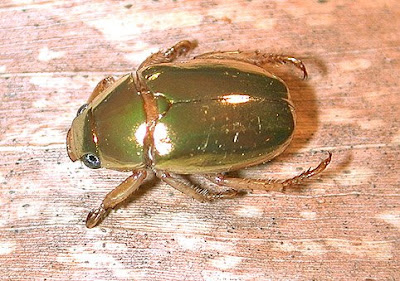 Anoplognathus aureus is one of a number of species called Christmas Beetles. This little jewel apparently deceives predators by appearing to be a spot of reflected sunlight on a leaf. 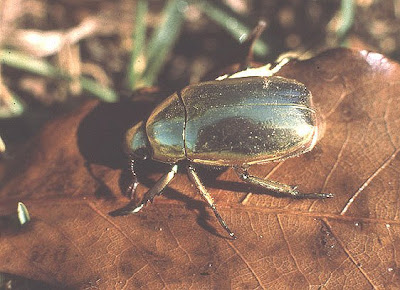 I took this photo of a scarab similar to A. aureus in Costa Rica. It is unrelated and is a great example of convergence. 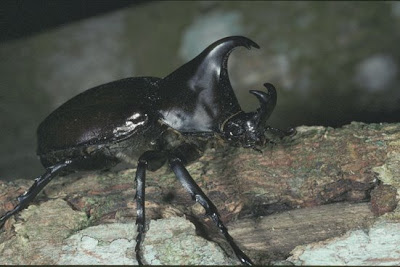 The Rhinoceros Beetle Xylotrupes ulysses australicus (Thomson) is common along the coast from Sydney to southeast Asia. They always attract attention when they are found at lights. Males have an elongated horn that is used in jousting with other males. These beetles are often kept as pets in Asian countries. They are easy to keep. Adults feed on a variety of fruits and the large grubs can be raised on leaf litter with a generous supply of dry dog biscuits. Tiger Beetles (Carabidae; Cicindelinae) are usually encountered along ocean shores or along streams. There are a few, like Distipsidera undulata, that occur on tree trunks where they hawk passing insects. This one is an infrequent visitor at the light. 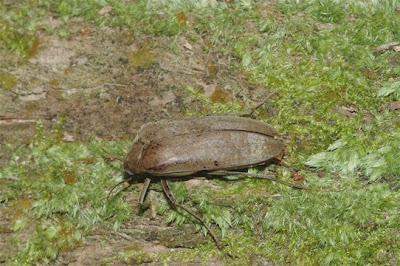 Rhipiphorid beetles are special--but they don't look very special. Females are usually wingless and lack mouthparts. This suggests something special. They are parasites of other insects. This one is probably Rhipidioides and is probably a parasite of cockroaches, and probably those in the family Blaberidae. [If you're into cockroaches, this is the place. I've found about 70 species here, mostly in the Blattellidae]. The first instar is a triungulin larva that travels around at a fast rate looking for the appropriate host. Hosts of other genera include wasps, bees, flies and some other beetles. 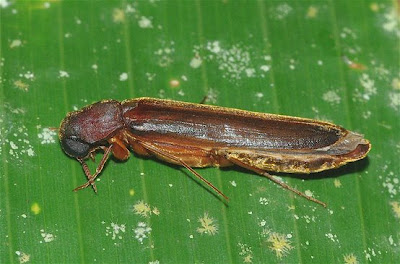 Melitomma sp. is a member of the Lymexelidae, another beetle family with somewhat peculiar habits. The larvae are wood-boring but feed not on the wood but on the ambrosia fungi that grow on the walls of their burrows. Females have pouches near the end of the abdomen where they store the fungi that are later deposited with the eggs. When the eggs hatch, the young larvae "infect" the walls of their new burrows with the fungi that grow and nourish them. 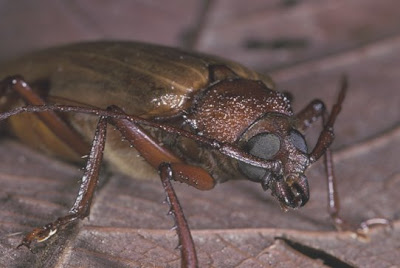 Longicorne Beetles (Cerambycidae) range in size from beetles a few millimetres long to some giants over 70 mm. The larvae bore in wood, roots and other plant material. It is a large family and being in a rainforest you would expect an impressive array of species. And such is the case. 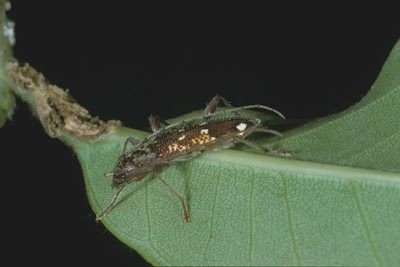 Coptocercus biguttatus is one of many in the genus. They are distinctively marked and come to lights or can be found on flowers during the daytime. 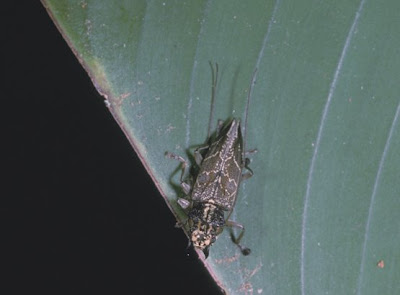 Many longicornes assume unusual patterns at rest. This is to deceive potential predators. Being wood borers, most species possess formidable mouthparts. It is always intriguing to watch the assortment of Black Butcherbirds, fantails, robins and the inimitable Brush Turkey, attack beetles in the morning. One bite from the beetle could snap off a toe or remove the tongue of the bird, but I have never seen a mishap. The birds know how to approach the resting beetles and they take precautions.

These articles are fantastic; the information you show us is interesting for everybody and is really good written. It’s just great!! Do you want to know something more? Read it...: Great investment opportunity in lots in Costa Rica