Why Borneo of all places. Well it a place that I have visited about a half dozen times in the last 15 years and it is an interesting place that most folk know little about. It is easy to get to and not very costly once you are there. I would like to relate some of my experiences and this might stimulate some of the readers to visit the place. You can reach Borneo by air from Kuala Lumpur, one of the most modern and magnificent airports in the world. Air Asia and Malaysian Airlines service Kota Kinabalu several times a day.

My introduction to with Borneo started after I met my friend Abas Lamat in Honolulu in the 90’s. Abas was earning a higher degree in management and we met and became good friends. After returning to his home in Kota Kinabalu, Sabah, Borneo he invited me to visit and thus started a series of exchanges between the two countries- Malaysia and Australia. 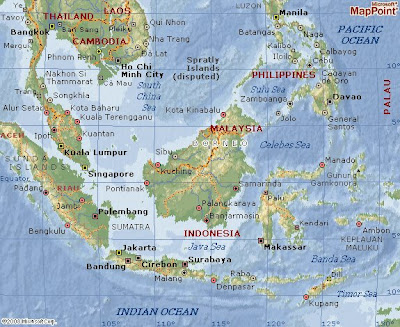 As you can see from the map, Borneo is situated in the South China Sea not far from the Philippines. Three countries occupy the island. Indonesia claims the largest amount of territory with its state Kalimantan occupying the east and southern portion. Malaysia holds claim to the west and north with two states, Sabah and Sarawak. The Kingdom of Brunei is situated in the northeast and is surrounded by Sabah and Sarawak. My friend Abas lives in the city of Kota Kinabalu in Sabah. This is a modern city of over a million people including the urban areas. There are multi-level shopping complexes and the standard of living is much like it is in Australia. People have over-power 4-wheel drive vehicles and spend too much on housing and buy too many things they don’t need. There are basically three ethnic groups in Malaysians. The Malays are the most populous followed by Chinese and the Indians. In Sabah, there are large numbers of Filipinos, legal and illegal, and the Philippines have claimed Sabah as theirs from times to time. I should say that I know nothing about the Indonesian part of Borneo and have visited Brunei only for a short period. My comments will pertain only to the Malaysian part of the island, mostly the state of Sabah. 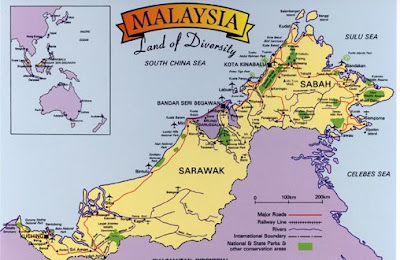 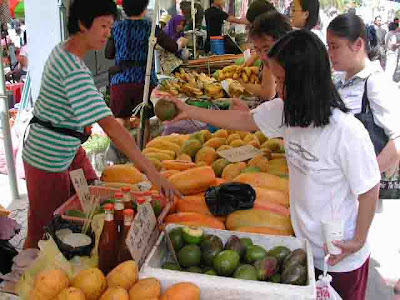 Sunday mornings in Kota Kinabalu means street markets. An abundance of fruit and local crafts can be purchased at very good prices.

One of the many wonderful features of Borneo is the food. The three ethnic cultures utilise the products of the sea and an extraordinary range of fruits and vegetables in their cooking. I’ve never been anywhere else where there is so much consistently good food. Since all is prepared fresh, you have no problems with spoilage. I have never gotten sick from eating the food or drinking the water there. And because Malaysia is a Muslim society, alcohol and its associated violence is not a problem. What a relief that is! You can always buy a beer, but the general population does not require alcohol to have a good time. The only important health problem that one need be concerned with is Malaria in the outlying districts. Tablets can control this. Since Sabah is within 5 degrees of the Equator, it is a tropical place with warm, wet and humid conditions throughout the year. There is much rain and no cyclones or severe winds. 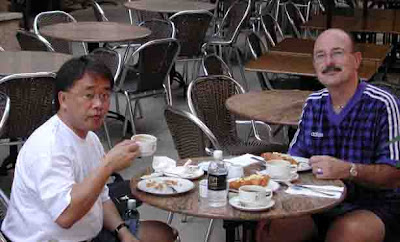 Abas Lamat and DR have a cuppa at a sidewalk cafe in Kuala Lumpur, Capitol of Malaysia. 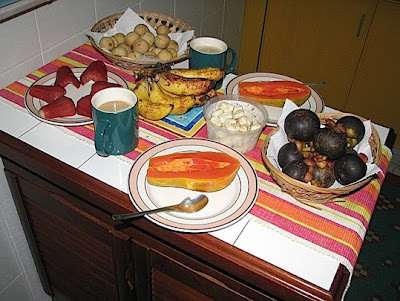 A typical tropical breakfast in Borneo. From left to right. At the top Langsats; below them are Jambu, a Syzygium species; then one of many kinds of banana; at the top Papaya; then in the container Tarap, a form of Jakfruit; more Papaya and the purple globular fruit Mangosteen, the Queen of Tropical Fruit. All very fine eating. 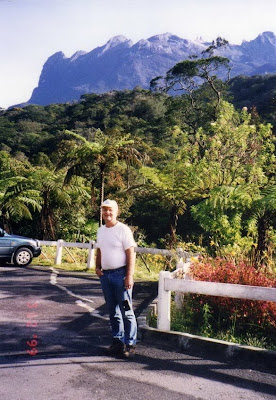 DR at the parking lot in front of Mt Kinabalu. This is the highest mountain between the Himalayas and New Guinea. At an elevation 4101 m the mountain contains much biota. Over 1000 species of orchids have been recorded from there. There are alpine plants at the higher elevations and lowland dipterocarp forests at the base. Hornbills and monkeys can be seen and heard.

All that being said, I’ll try to be brief and let the photos do the talking. Borneo has had a colonial history. In fact, Kota Kinabalu was formerly known as Jesselton when it was run by the British. Many important early biologists visited the country and made important collections that now reside in European museums. Populations growth and over development have taken its toll on the environment and the continued planting of Oil Palms (Elaeis guineensis) is turning more and more of the rainforests into monocultures. This is the most pressing problem in southeast Asia, from and environmental standpoint. Each time I visit the country, I am surprised at how much more of it is being changed for palm oil production. What a pity.

When my British friend Paul Brock discovered that I was visiting Sabah, he suggested that I look up Datuk Chew Lun Chan, a book publisher who had an interest in Stick Insects. What a fortuitous meeting. We have become good friends. In fact, he runs a 5-star nature book publishing business called Natural History Books (Borneo). Anything you want to know about Borneo’s natural history you can find among his titles. In addition he has reprinted many old books dealing with the early exploits of naturalists and the colonial history of Borneo. I was most fortunate to find him enthusiastic about publishing my Guidebook to Australian Grasshopper and Locusts since no Australian publisher was interested. 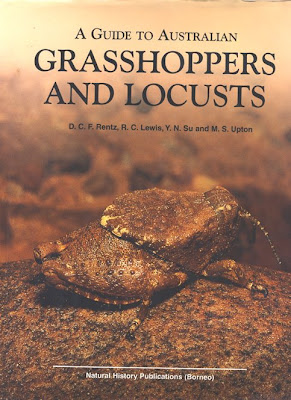 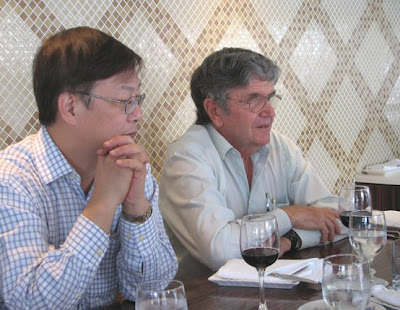 A great book to get you to start thinking about a visit to Sabah is Discovering Sabah. This is available from Natural History Books website noted above. 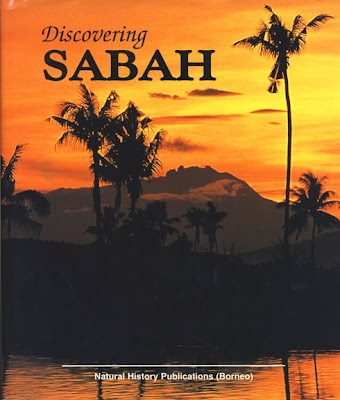 From time to time I will add blogs on some of my experiences in Borneo. I hope this will engender a curiosity and cause you to venture a bit farther afield than you might have in mid right now.
Posted by Mr. Smiley at 11:37:00

When is the next time you are going to Sabah ?

Hi Mr. Dave, I recently visited KK and found your book - A Guide to Australian Grasshoppers and Locusts in several good bookstores. It really is a huge book! Back in my small hometown - Tawau, our bookshops here displays very few books from the Natural History Borneo publishing company so I can only enjoy buying natural history books whenever I visit KK.

eToro is the #1 forex trading platform for newbie and pro traders.