We recently described three new katydid species that may be of interest. All are in the tribe Agraeciini of the subfamily Conocephalinae. While that may be a mouthful, agraeciines are an important component of the Australian katydid biota, especially in the tropical regions. Many species remain to be described and their relationships established. A number of genera show relationships with those of New Guinea and the Pacific while others are wholly Australian.

Austrosalomona
Austrosalomona Rentz was described to accomodate three species. A. falcata (Redtenbacher) occurs along the coast from Bateman's Bay to Sydney, NSW. It is a common visitor to gardens in the Sydney area and can be heard and found in Sydney's Hyde Park. A. personifrons lives on Norfolk Island, South Pacific and A. zentae Rentz is known only from Lord Howe Island. Several species remain to be described occurring along the east coast of Australia from Fraser Island north to the Daintree.

Austrosalomona destructor Rentz & Su-The Destructive Katydid
We think this species is aptly named. Anyone trying to grow orchids, ginger or other plants with outstanding flowers will know this katydid because after dark it finds developing flowers and literally "nips them in the bud". In general these katydids are omnivorous opportunists. They will eat any plant or animal material that they find. And they are common. Co-incidentally, these katydids can be transported in or on vehicles or goods. During the day they secrete themselves in cracks and crevices and can be transported considerable distances to new habitats. 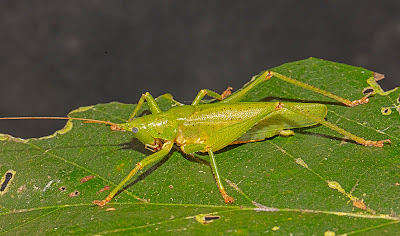 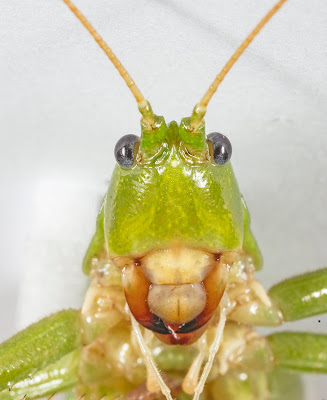 Austrosalomona destructor Rentz and Su frons. With some specimens the eyes are strikingly purple. 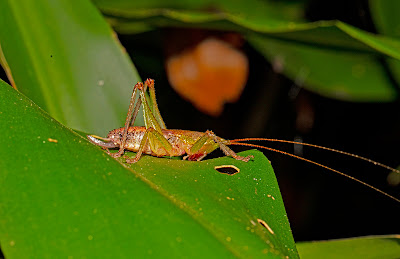 Austrosalomona poecila Rentz & Su-The Grey Katydid
This is a larger and less common species than A. destructor. It occurs over much of the same geographic region and has been found on several coastal islands in the Cairns region. It seems to have much the same habits as A. destructor but is less common. Most dead specimens appear grey in colour but when living specimens are viewed closely, they are a variety of subtle colours. 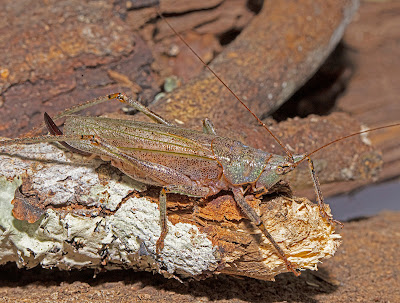 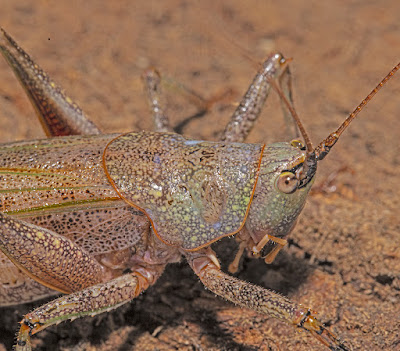 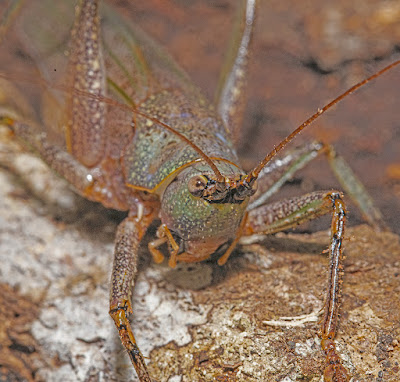 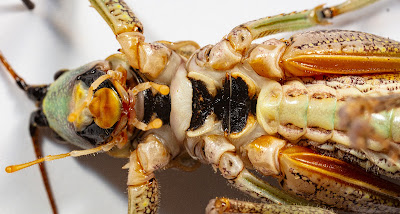 Salomona is a widespread genus occuring on many Pacific islands. Two species have been recorded from Australia. One, S. solida Walker was described from Sunday Island in the Torres Strait. It has not been seen in the 150 years since its original description. The other S. nori Rentz & Su is a large, aggressive species frequently seen by tourists in Iron Range, far north Queensland. The katydids live in tree holes that result from dead branches. They use their powerful mandibles to hollow make a hole that they live in for many days, gradually increasing the size of the hole as they grow. They make nightly forays and return to the same hole for many days. This demonstrates a homing instinct in these katydids.

Salomona nori Rentz and Su-Nori's Katydid
We named this species in honour of our colleague Dr Norihiro Ueshima with thanks for his interpretations of the karyotypes of many of our species over a period of more than 45 years! 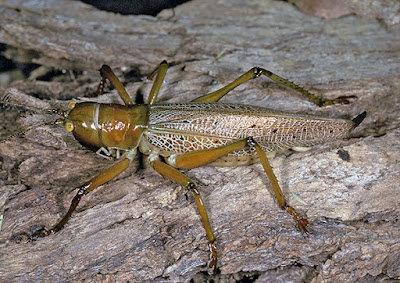