We have been visiting Gary Wilson's Nepenthes study site near Babinda, Queensland frequently in recent weeks. There is always something of entomological interest happening there.

The site is on the edge of a lowland rainforest and abuts a cleared field that is comprised mostly of the introduced Singapore Daisy, Sphagneticola trilobata, which, curiously, is not from Singapore but is native to tropical America. It is a perfect weed. It quickly takes over any open area through propagation by rhizomes. But I digress. I will have more to say about this in future blogs.

In a rather open, degraded area adjacent to the rainforest the Singapore Daisy seems to avoid, there is a small population of the Pitcher Plant, Nepenthes mirabilis. I have reported on this before. We commonly see insects around the pitchers and many meet their fate in the juices within. 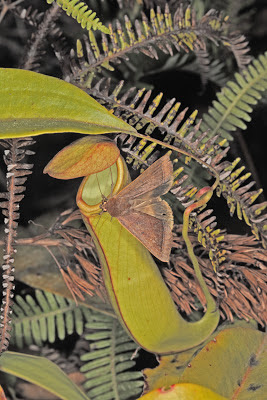 This noctuid moth has been attracted by the odour and the food provided by extrafloral nectaries. It may be "lured" towards the inside of the pitcher. If it strays too far within, it will be unable to get out and will eventually drop into the digestive fluid and be "consumed" by the plant. The level of the liquid in the pitcher can be seen just below the small red spot in the centre of the pitcher. 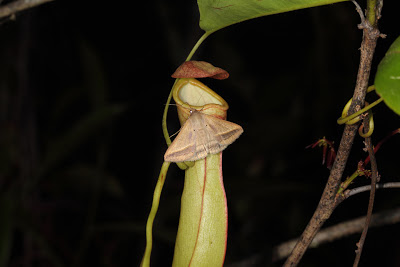 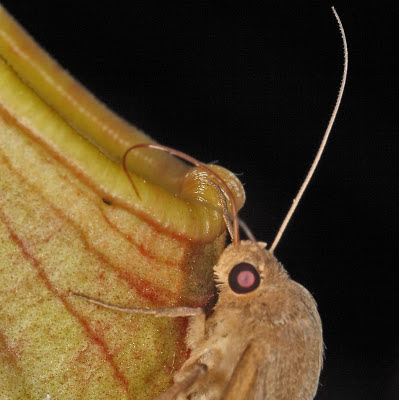 The tongue of the moth is ingesting the liquid from the extrafloral nectaries that surround the lip of the pitcher. 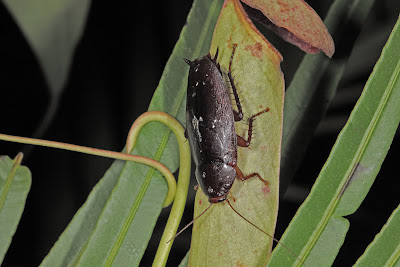 Some insects may be too large to fit into the pitcher and "short-circuit" the system by feeding and then leaving. This native cockroach, Methana convexa, is probably too large to fit into this pitcher but its nymphs have been found in other pitchers from time to time. The plant wins--eventually.
Posted by Mr. Smiley at 13:09:00