Mantispids are strange-looking insects that look like a cross between a mantis and a lacewing. They are in no way related to the Mantodea. In fact, are not even distant relatives.
One of the many grey mantispids that come to lights 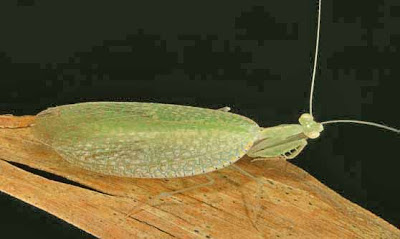 Mantispids are members of the Neuroptera, the order that includes lacewings, ant-lions, sponge-flies and the like. They are fairly common in Australia. Greyish ones a usually found at lights were they prey on smaller insects.

The mantis-like appearance of mantispids is because they both have raptorial forelegs that are used to capture insect prey.

Mantispids were generally rare and considered collector’s items in the San Francisco Bay Region where I grew up. I can still remember the first one I ever saw. It was collected by my childhood friend, who reads this blog, Charlie Cushner . It was found at Tesla Road, near Livermore, one of the favourite sites for fieldtrips when we were both members of the Student Section of the California Academy of Sciences in the mid 1950’s. So it made quite an impression. Search as I did, I did not find one on that day and was quite jealous of Charlie’s prize. It was Chimaciella brunnea Say, a species that appears similar to a Polistes wasp.

So it was like a nostalgia trip when this mantispid turned up at the light the other night. It was about the same size and colour as its Californian relative. This is identified as Euclimacia nuchalis (Gerstaecker). It is very similar in outward appearances to the California species noted above. 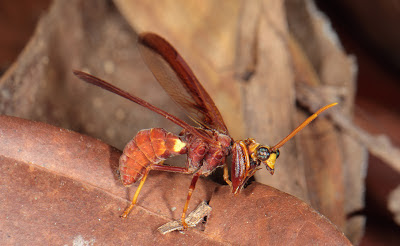 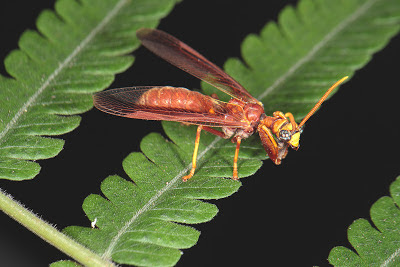 Mantispids have a complicated life history. Many are obligate parasites of spiders. They have an active triungulin larva that mounts a spider and enters her eggs sac to feed on the eggs. Some species retard the growth of their hosts by chemical interference.

Some Australian species congregate at times in great hundreds laying small eggs on stalks. But for the majority of species, we really know nothing of their life history.

To return to our story, shortly after E. nuchalis arrived, this fellow appeared on the same light sheet. Is it the opposite sex of E. nuchalis, a variant or a different species? I have no idea. But it resembles another wasp. If is the same species, it has different genetic history to one that resembles the vespid wasp. This one looks a bit like some of the pompilid wasps that seek out spiders in our part of the world. What a complicated genetic history this little insect must have. 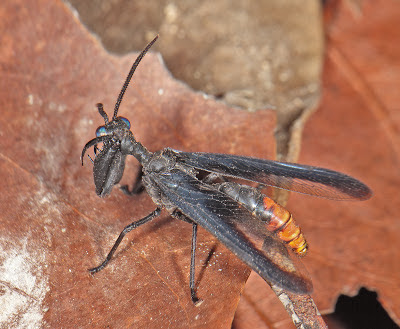 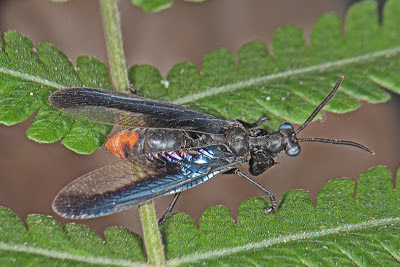 These are fantastic animals! I once watched one emerging from an egg sack of a spider, while the mother spider looked on and continued to guard the sack, with no clue that all her eggs were gone.

thanks Piotr. Our local expert is going to comment on the two in the blog soon.
D