The Asian House Gecko, Hemidactylus frenatus, is a common commensal with those of us living in the tropics. It has a much more extensive range than the tropics. It has been recorded from every Australian state and is widespread in the tropical world, being moved around by commerce. The first known occurrence of this lizard in Australia was in 1845. This gecko lives insides homes and is often tolerated because it feeds on unwanted insects and spiders and is a bit of a curiosity. They produce a characteristic call that is audible from several metres. It is not the only gecko that produces sound, however. Many geckos are vocal.

This Asian House Gecko is carrying a number of parasitic mites. These are probably Red Gecko Mites, Geckobia bataviensis, a species that lives on the toes of geckos and that can transmit disease. 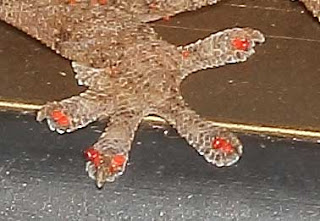 Asian House Geckos live inside and outside the house but don't seem to venture very far into nature. Predators probably take their toll. Many people see them like this clinging to a window awaiting insects attracted to to the lights from within. (Sorry about the photos, folks. It's hard to get close to these guys) 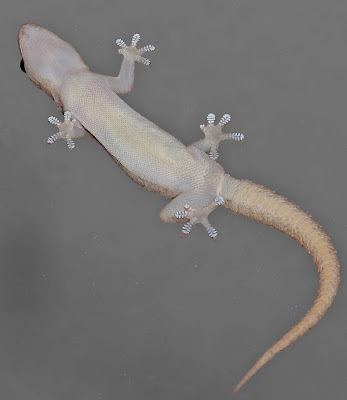 But how do geckos cling to ceiling, walls, glass etc? Aristotle was taken with the mechanism but he did not discover the real mechanism. In fact, it was only relatively recently that the true explanation has come to the fore. Geckos have millions of fibres on the pads of their feet.  Each has a minute suction cup at the tip. In combination they have the power to hold the lizard to its substrate. But then how do they detach themselves? Apparently it's as simple as simultaneously changing the angle of the suction cup and the pads detach. Commerce has produced a new adhesive utilising the technique of millions of fibres that can attach to any substrate, smooth or rough.

This is a very young Asian House Gecko. Females lay eggs in drawers, between cushions in sofas or in any number of concealed spots. Two eggs are laid in each clutch. If successful, the Asian House Gecko can live for about five years. But in the house they face a multitude of problems including lack of food and water, desiccation, cats and the most efficient predator of all-- the vacuum cleaner!
Posted by Mr. Smiley at 19:22:00

Thanks so much for taking the time to comment.
D

Great post. I'm a foreigner in Philippines and now I know who is the "guy" that doesn't leave sleep at night with its "tsik-tsik.-tsik"