A Night Walk in the Tropical Lowlands

I recently had the opportunity to visit a lowland rainforest site near Babinda. Aside from having some very nice, dense forest, there was a previously cleared area that is the site for a Pitcher Plant, Nepenthes mirabilis. Some very nice insects were out and about in the rainforest. Here's a sample: 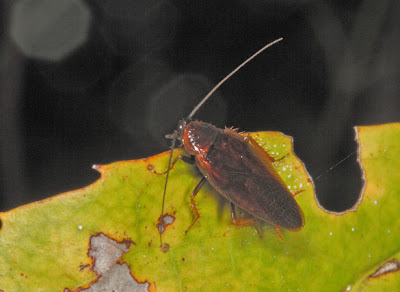 A native blattodean, Carbrunneria cerciflavida (Roth), a species that has probably never been photographed before. 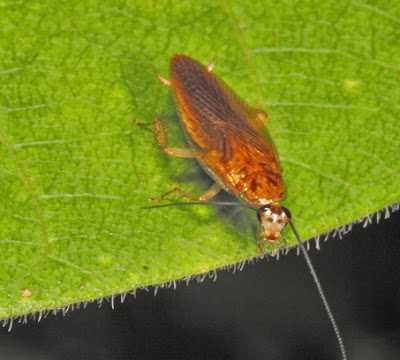 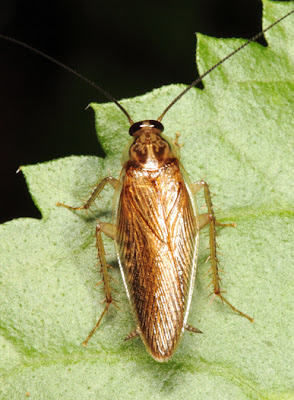 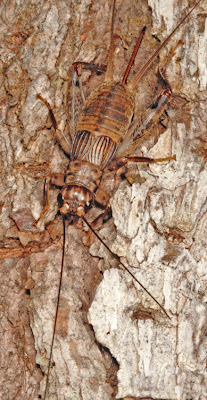 A bark-dwelling cricket, Myara sp., has taken up residence in a planted, introduced pine tree, Pinus. 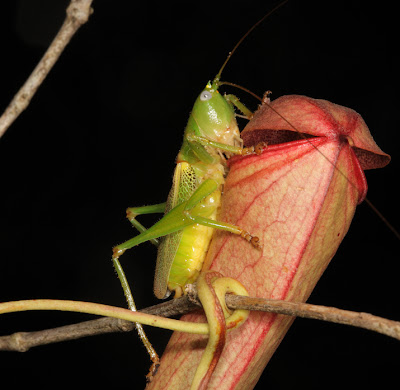 This agraeciine katydid, Goodangarkia prasinus (Karny) is "mouthing" the exudates on the rim of a Pitcher Plant. The exudates lure potential prey into the pitcher where they fall into the digestive juice of the plant. 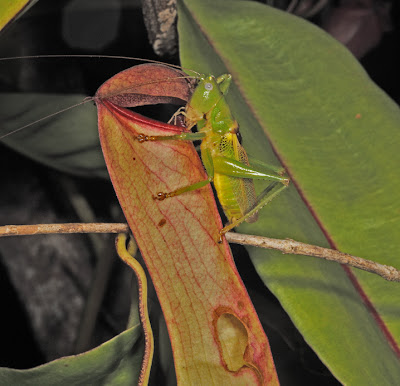 Note the hole in the pitcher near its base. This is commonly made by katydids that consume the partially digested contents of the plant. 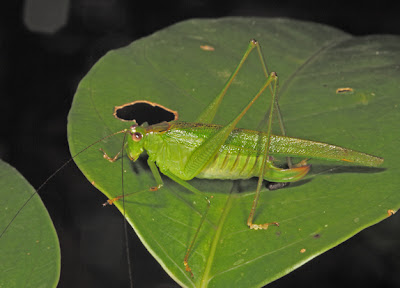 A female phaneropterine katydid, Kurandoptera purpura Rentz, Su, Ueshima. The blade-like ovipositor is used to insert the disk-like eggs between layers of a single leaf. 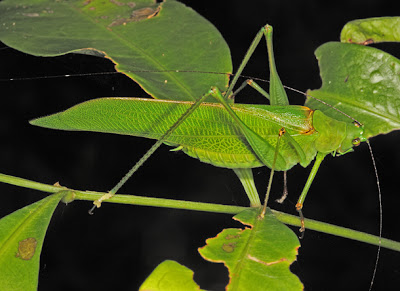 Another phanderopterine, Leucopodoptera eumundii Rentz and Webber. This beautiful katydid has bright yellow underwings that are concealed by the top pair of wings. 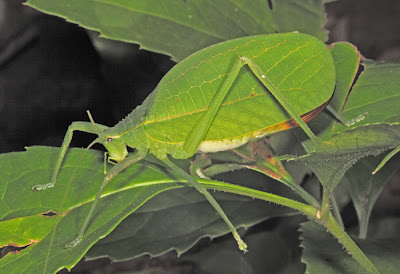 Mastigaphoides haffneri Weidner is a green katydid in a different subfamily from the above. It is a member of the Pseudophyllinae, a group with several rainforest genera that are often encountered at night. 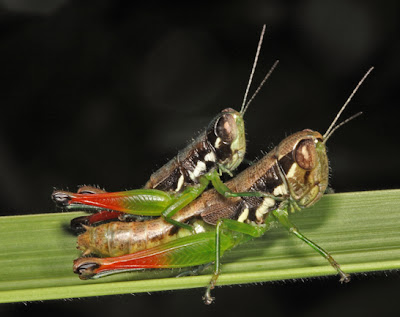 Mating grasshoppers of the widespread oxyine species Methiola picta Sjostedt is common along rainforest margins in north Queensland where it feeds on a variety of grasses, native and introduced.

One of several mantids living in the rainforest. This one is a species of Orthodera, at home on an introduced pine.
Posted by Mr. Smiley at 06:59:00

Glad to see you are up to your old ways -- like wandering around the woods at night. Great photographs -- Young Alice will be happy to know you paid attention to her photography lessons.

This is commonly made by katydids that consume the partially digested contents of the plant.

Is there nothing katydids can't do?

Now I am going to get sidetracked this evening reading about Nepenthes -- insect interactions.

great as always, but I need to pick ya brains a bit here mate; what book would you recommend that is fairly comprehensive re: the identification of insects in QLD? esp FNQ ... any help would be most appreciated, cheers!

There is nothing that is really specific for the majority of insects you may encounter. The series of Guides published by CSIRO should help as at least two authors live up here and there is a distinct bias of northern species in their treatments.

Then there is the large book by the Queensland Museum, on "The Wildlife of Far North Queensland" but I suspect you have that.

That's about all I can offer. There are blogs that can help like Buck Richardson's Moth Identification section of his bigger blog: http://www.leapfrogoz.com.au/LeapFrogOz/Moth_Identification.html. There are more than 1000 north Queensland moths on this site and that's where you should go for any moths from around here that you want to identify. Other than that, it's a pretty tough slog to get things identified and learn something about them. Sorry I cannot be of more help.

Soon I will start a "Grasshopper identification blog" but this will start slowly and increase over time.

Cheers for that, you know with all the amazing blogs on wildlife up here - you'd think some kind of collaborative effort could be organised and published eh? ... ah well, it's a thought anyway ... thanks again and when you start up that new blog, please give me and Jo a heads up eh?