A Bit Of A Mystery

For the past few years I have  been observing the strange antics of some peculiar "tube critters". These creatures, which appear to be caterpillars, start out by anchoring themselves to a particular spot on the bark of certain select trees. In this case, the Kuranda Quandong, Elaeocarpus bancroftii. As they develop, the case lengths to an ultimate length of about 80 mm. They operate in the radius dictated by their anchor and seem to be feeding on bark. After several months in the same spot, the surface of the tree does not seem to have changed in appearance at all. Selected trees bare 20 of these creatures within a couple of metres of the ground.

The case consists of phrass-bits and pieces of the bark and faecal matter. When Murray Upton visited last year we observed these creatures feeding an moving about on their tethers. At Thanksgiving we captured a few and kept them in humid containers but no adults eventuated. Now the tubes are disappearing, probably being broken up by the weather and ants which were seen around them months ago but that cause no harm. So we must wait till next year to attempt to see what these insects are. We think they are case moths, family Psychidae, but can't be certain until we see an adult. 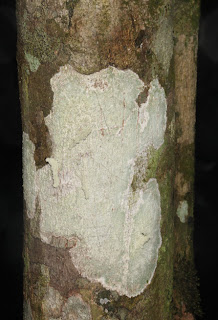 The other mystery involves white creatures on this patch of lichen. Look carefully and you can see several elongate lumps! 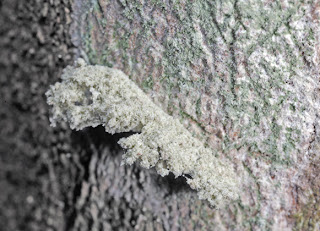 Each one has an amorphous shape. As a group, they "twitched" from time to time and they moved from place to place but for weeks stayed on the single patch of lichen. Other trees and patches were searched but no other sightings were recorded. 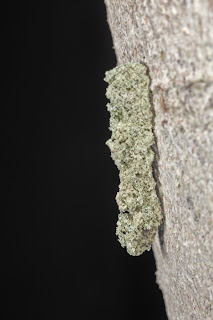 Then recently the group disappeared. I though the resident Boyd's Forest Dragon may have either eaten them or disturbed the group when he scuttled up the tree. Then one appeared on the light sheet in an apparent attempt to pupate. It is now in a container and we await the emergence of this odd insect.

They may be geometrid loopers that cover themselves with lichen. They inch along in the pattern of geometrid caterpillars but I've never heard of a geometrid that covers itself with its host plant.
Posted by Mr. Smiley at 05:55:00

Interesting that the grey-covered larva is relatively mobile, Dave and moved (crawled) to your light sheet.
It will be interesting to see what emerges.
Your long "tube critters" are presumably some form of case moth, but obviously not "self-contained" like the regular ones.
Cheers
Denis

There's always something to observe around here. We'll let you know what emerges from the White Twitcher.
D

Hi, I have just today seen something exactly like the lichen-covered looper you describe, on a the bark of a rubber tree here in Malaysia. Searching around trying to find what it was, I came across your photo (thanks Google). I have only one poor photo of the one I saw, but I did take some video of it shuffling along.

Following your lead to research more, one of the Geometrids uses the plants it feeds on to camouflage itself - the larvae of genus Synchlora. Possible it is one of these?
Interested to find out more!
Thanks
Phil.

Shows how incredible this "media" is that we can communicate with such a subject in different parts of the world. Hope you can rear one out. Mine, I hope, is in the pupal stage.
D