This little cricket visited our lights recently when we set them in mixed wet sclerophyll vegetation near Mareeba, Qld. It is a plain cricket with greenish grey eyes. Males sing with a continuous loud series of chirps. It is a member of the Trigonidiinae, a large subfamily of Cosmopolitan species what occur in the temperate and tropical climes of most continents. Some have extensive geographic distributions.
The Trigonidiinae has been considered as a separate family by several authors. All species are small and many are colourful. Some genera produce no sounds at all. These will be dealt with in a later blog. 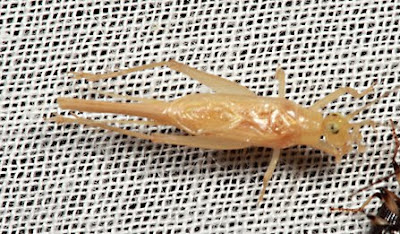 Anaxipha longipennis (Serville), male. Measures 11 mm from head to tip of the second pair of wings.
A. longipennis was recorded by Otte & Alexander from Australia but the Australian representative may represent something else as the species does not appear on the distribution maps in the Orthoptera Species File.
The Calling Song may hold a clue to the identification of this little cricket. It is performed at night and consists of a continuous sequence of chirps.

Oscillogram of the Calling song of A. longipennis. The song may be continuous for more than 30 seconds or until the cricket is disturbed.