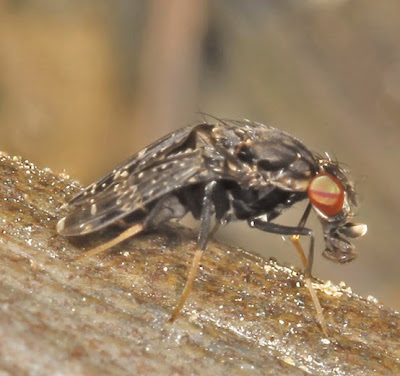 I was wandering (in my case stumbling) around the forest the other day and came across a palm frond lying on the ground that was especially attractive to two fly species. They were feeding upon something so small that I could not detect what it was. They may have been eating fungal spores or bacteria that coated the surface.
As usual when folks get together some courtship takes place. These two seemed interested on one another but continued feeding.
These are lauxaniid flies, probably Homoneura nigra Kim. These flies live as larvae in the soil where they feed on decomposing vegetation. They move around with the wings peculiarly bent downwards. I haven't seen this species before, but then I've not really looked for it. As an aside I must take this opportunity to reveal the genius of SP Kim, describer of the species and entomological illustrator extraordinaire. The late "Kim" as he was known was employed by CSIRO Entomology as a technical illustrator. He was almost without rival- among the best of his day. He knew how to emphasize structures and what they would look like when they were reduced for publication. When I asked him how long it took for him to do the Cooloola Monster habitus drawing he said 3 weeks for each sex! But they were well worth the wait. In the "good old days" we were more concerned with quality than quantity and this excessive expenditure of time did not worry the management.
Kim's illustrations can be found in most of my publications from 1978 till the late 90's. Kim pursued a higher degree during much of his time at CSIRO and his specialty was the fly family Lauxaniidae. His thesis is a monument to persistence as well as his artisitc skills. 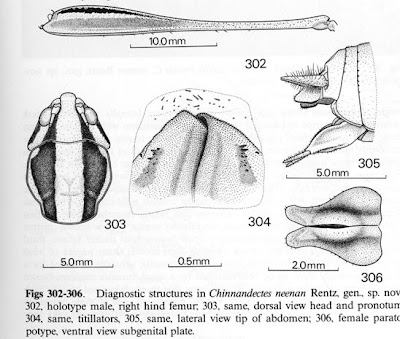 A typical plate with illustrations of SP Kim. From Rentz, 1985.
But I diverge. Another visitor to the palm frond was this distinctive little fly with its humeral spot. Perhaps, one of our readers can inform us of the family. It was very intent on feeding but the numbers of this species were well below those of the lauxaniid. 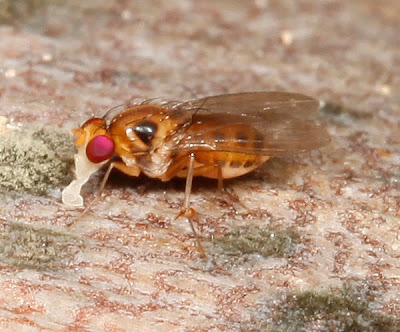 Looking further, I discovered a fungus-killed ant under a palm leaf that was being visited by two first instars of a cockroach, probably Mediastinia sp., a not uncommon visitor to the lights. During the day these flat little cockroaches (among the smallest of cockroaches in the rainforest with adults measuring about 6mm) hide in tightly unfurling leaves. 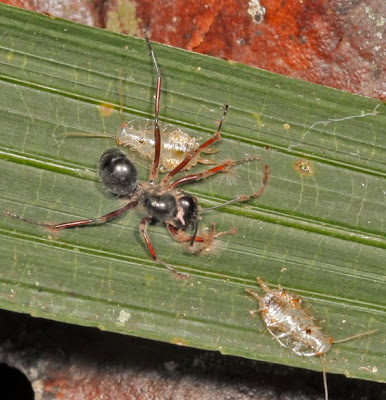 You can judge the size of the cockroach bubs relative to the size of the ant which in itself is not very large. Roaches are very important in reducing organic material to soil. In terms of numbers and biomass, they are probably near the top of the scale in the rainforest. But I'll more to say on that later.
Literature
Kim, S. P. 1994. Revision of the Australian species of Homoneura van der Wulp, Trypetisoma Malloch, and allied genera. (Diptera: Lauxaniidae). 443 pp. Monographs on Invertebrate Taxonomy, vol. 1. CSIRO Information Services, Collingwood, Vic.
Rentz, D. C. F., 1985. A monograph of the Tettigoniidae of Australia. Vol. 1. The Tettigoniinae, with an appendix by D. H. Colless. 384 pp. CSIRO Australia, Collingwood, Vic.,
Posted by Mr. Smiley at 11:20:00

Dave! You left me hanging with the cockroaches! When are your publishing Part 2?

Hi Dave
Interesting fly with those droopy wings. One wonders of if doesn't "fly" very much at all - just crawls around in the forest?
Nice tribute to your former colleague - Kim.
Denis Wilson

I'm not overly familiar with the Australian fauna, but I would suggest that your yellow fly is either Drosophilidae or another Lauxiniidae, both families are hyper-diverse. Great photos!

I've not seen these photographed live before, it's great to see them in natural posture. I suggest that this is Eostegana australis Bock, 1982 (Drosophilidae) type locality Kuranda ... there's a very good picture of the wing on p. 20 of Bock's description in Aust J Zool, Suppl 89. http:/dx.doi.org/10.1071/AJZS089 (Shane McEvey July 2014)