A few nice things have to to the lights recently and we have a couple of rarities from a "night out" in the open woodlands north of Mareeba. 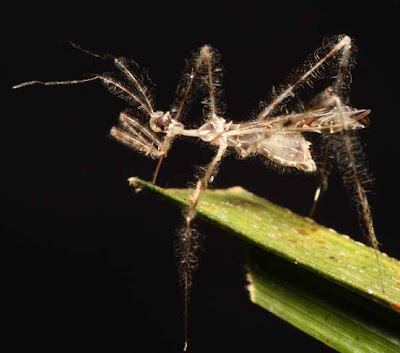 This is an emesine reduviid. We dealt with this once before in a previous blog. They are such photogenic insects that they are hard to pass up. 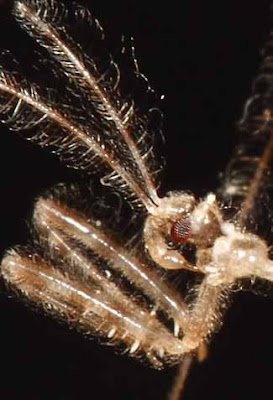 Close-up we can see the beak that the emesine uses to inject its prey with chemicals to both anesthetize it and then later digest it. The hairs and colour help protect it as it lies in wait for a victim.

Recently my friend Peter Shanahan brought over an odd katydid that had flown into his living room. It turns out to be a species I described in own of my monographs years ago. I had found it in Kuranda but not since 2005 and did not have a photo of it to include in my recent Guidebook to Australian Katydids. Fortunately it can be viewed on this blog. Its name is Zaprochilus mongabarra Rentz. It is known from a handful of localities from north coastal New South Wales to Kuranda. This species was noted in a blog previously with regard to its relative Anthophiloptera dryas and other members of the Zaprochilinae. Recently a specimen of the latter was brought around by a friend. So it has been a good year for seeing some of these odd katydids. The cryptic posture disguises the katydid during the day when it is inactive. 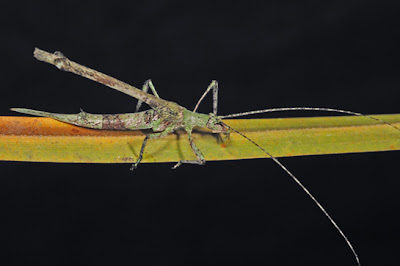 This is the specimen that appeared at my lights a day after Peter found his. It has more green in its colour pattern. 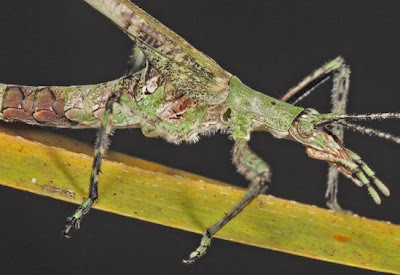 A close-up view shows its two hearing organs. The hole beneath the pronotum is called the thoracic auditory organ and the slit visible on the far foreleg is called the tibial auditory organ. The mouthparts of all katydids of the Zaprochilinae are prognathous, that is, they are developed forward. This allows the katydids to delve deep into flowers to obtain pollen and nectar. 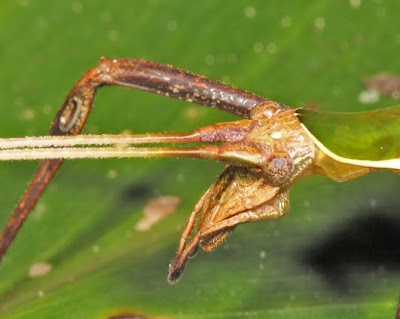 The mouthparts of Anthophiloptera dryas are similarly prognathous, an an adaptation to flower feeding. 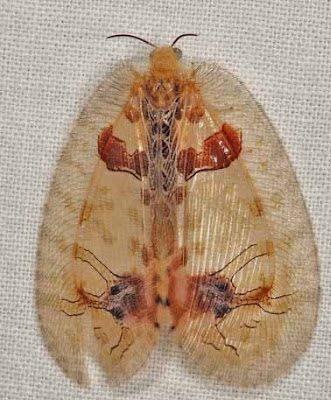 This looks like an abstract painting but is one of Australia's odd neuropterans. It is a member of the family Psychopsidae. The family is best represented in Australia and South Africa. Larvae of these insects live under bark where they are probably predators. Adults are rare and active at night. These insects take up to two years to mature. It is an "entomological treat" to find one. There is another species with wing markings said to resemble a snake's head. But this may be carrying evolution a bit far! This is probably the genus Psychopsis. 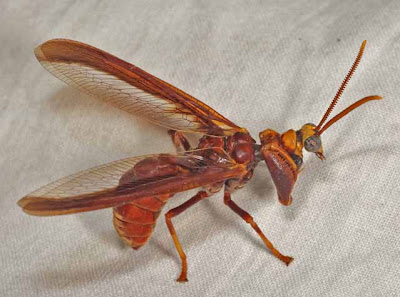 Meet a mantispid. Not from one of the many outer space movies, this one is real. It resembles a mantis or a wasp but is neither. It's a member of the Neuroptera family Mantispidae. The fact that the forelegs resemble those of a mantis is a matter of pure convergence. Mantispids are not related to mantids. They are spider parasites and have elaborate biologies that are quite complicated. The mantispid larva enters the egg sac of the spider either by riding on the female spider and waiting for the egg sac to appear or by searching directly for the eggs. Some larval mantispids are known to produce chemicals that retard the development of the spider to coincide with their own development. The parasite forms a pupa within the egg sac of the spider and eventually emerges. This is probably a species of Euclimaciella. 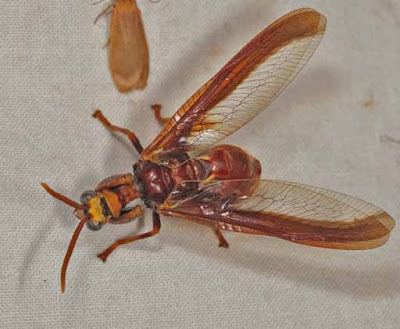 This dorsal view shows how much it resembles a Polistes wasp.
Posted by Mr. Smiley at 18:33:00

That Neuropterid is crazy, Dave. But the breakup looks like it would be quite effective camo.

Hi Dave.
That Katydid reminds me of my Zaprochilus australis, which you helped me identify last year.
The other insects are all very fascinating.
I would need convincing that the last one was not a wasp. It looks scary to me. But I trust you.
Cheers
Denis

Yes, it would be an active predator.

And yes, Denis, this species is very close to Z. australis but quite different when the genitalia and other features are compared. Also that little turned up top to the wings is quite distinctive. I think this species is quite common judging by the sounds one hears with the Bat Detector coming out of the canopy. It is only rarely coaxed down to ground level.

Man, I've never seen anything like that psychopsid - cool!