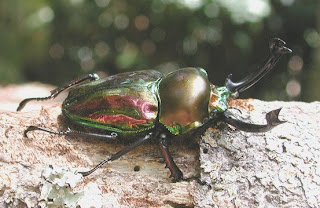 A large male King Stag Beetle with enlarged mandibles. Males try to pass under each other’s body in an attempt to dislodge the rival. If done on a vertical substrate, the rival may be thrown into the air, otherwise it may be rolled. Tarsi and legs may be lost in the conflict. Mandibles may also be use in mating to lever a female or carry her elsewhere! Wood et al (1996). 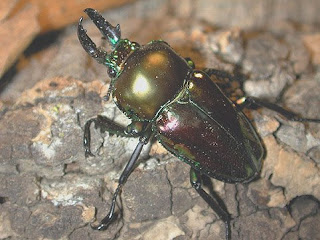 A “minor” male King Stag Beetle characterised by very short mandibles. Perhaps, this individual would not be successful in competing with other males during courtship. 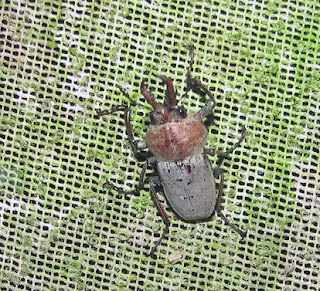 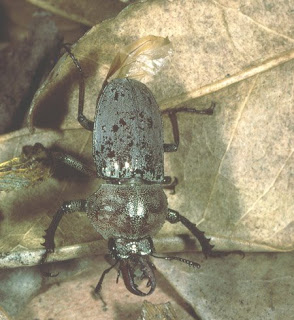 Other males, above and below of C. squamosus. 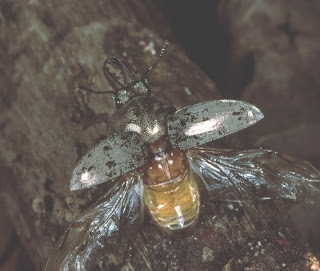 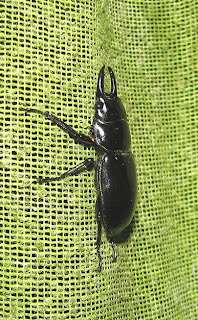 Prosopcoilus torresiana (Deyrolle) is a species that is not very spectacular in appearance. It sits motionless on the light sheet. 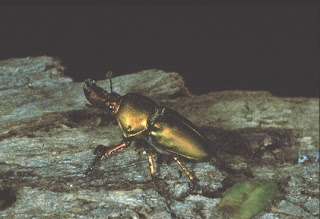 Lamprima spp. stags are diurnal and are found on flowers. They are most commonly found in eucalypt woodlands and not generally associated with rainforests.

Stag Beetles
Stag beetles are a group of about 1,200 species of beetle in the family Lucanidae. Some species grow to 8 cm (3¼ in), but most are about 5 cm (2 in). The English name is derived from the large and distinctive mandibles found on the males of most species, which resemble the antlers of stags. A well-known species in much of Europe is Lucanus cervus, referred to in Britain as "the" stag beetle is probably the origin of the common name.

Stag beetles are common in many forests throughout Australia. There are about a half dozen species in the rainforests around Kuranda. The most spectacular is the King Stag Beetle, Phalacrognathus muelleri (Macleay). Its biology and natural history has been documented by Wood et al. (1996). It was first described in 1885 by Sir William Macleay on the basis of a female from north Australia. Macleay was happy to name it after the Victorian colonial botanist, Baron Ferdinand von Mueller. Macleay thought it was the most beautiful insect he had ever seen.

The larvae of Stag Beetles live in dead logs where they are found in the rotting wood. The larvae of King Stag Beetle were originally associated with decayed Red Cedar Toona ciliata (F.Muell.) Harms logs. However, Wood et al. (1996) showed that this was an incorrect association. In fact, the beetles have been found in decaying wood, both standing and on the ground, of over 20 species of rainforest trees. The larvae seem to actually feed on white rot fungi which are present in the decaying wood. Adults of the King Stag Beetle are nocturnal, and they are usually seen flying just after dusk. As adults they feed on fruits and exudates from a number of rainforest trees. These beetles may be attracted to lights during the night, especially black light ultra-violet. We find around 6 beetles a year around the lights in the garden. I don’t think they are as rare as previously thought.

Males can range from 3.5 to 6.0 centimeters on average, though specimens can be as large as 7 cm. Females are significantly smaller ranging from 2.5 to 4.0 cm.

It is currently illegal to ship these beetles out of Australia without proper permits. Permits are mainly granted for research and breeding purposes. Luckily captive breeding programs are quite successful. The “collection trade” is very popular overseas, especially in Japan and Germany where collectors pay big money for exceptional specimens. The most important measures are size and colour. Fortunately, hobbyists have learned to breed this and other insects. This places less stress on the environment and the insects themselves. As a result, the prices for this beetle have slipped drastically over the years. Still they are worth a lot of money to some. Beetles for $$
A beetle on this site sells for $US850!! And they used to cost much more.

There are some lovely photos of this species at a number of sites on the web, many of them Asian in origin.

Other species of Stag Beetles at my light trap are much less spectacular and much smaller. Cacostomus squamosus Newman is a common but small species that is a frequent visitor. It is about 2.0-2.5 cm in length and feisty when encountered. It has longer-than-expected legs and sharp tarsal claws. Once firmly attached to its substrate, it is difficult to dislodge.

Prosopcoilus torresiana (Deyrolle) has no common name. There are some 84 species recorded in the genus. This one is a very placid beetle that sits motionless on the light sheet with mandibles agape. But it’s just a threat-it doesn’t crunch a finger or twig when provoked.

Thanks to Ross Storey for useful discussions.

Impressive bugs! (Hah hah, just kidding), but they are impressive. So how long does it take to get an export permit? Does a visiting Yank need a permit to collect them too?

YUP, LEGALLY YOU NEED A PERMIT TO COLLECT AND EXPORT ANY AUSTRALIAN INSECT. PERMITS ARE NOT DIFFICULT TO OBTAIN. YOU DO NEED ASSOCIATION WITH SOMEONE IN A UNIVERSITY OR INSTITUTION LIKE CSIRO.

THANKS FOR THE QUERY.