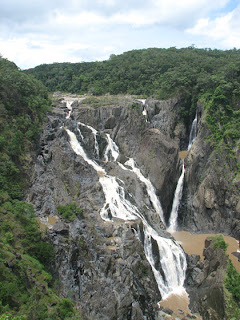 The Barron River Falls in Kuranda. 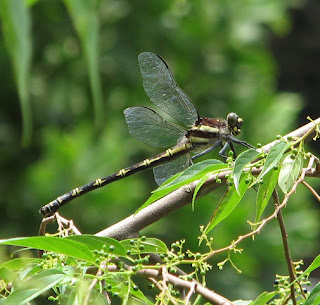 
In the three days from 7-9 Jan. 2008 we had over 700 mm of rain here on Butler Drive. Locals know when there is that much rain, it is worth having a look at the Barron Falls for a real aquatic spectacle. Well, as luck would have it, we waited a bit too long and the show was nearly over on Sunday, the 13th when we went to the falls. But it was lucky 13 because as we were looking Australia’s largest dragonfly the Giant Petaltail Petalura pulcherrima Tillyard or, perhaps, P. ingentissima (family Petaluridae) landed just in front of me and posed for a shot. This was my first sighting of this monster species. (There is some difference of opinion as to whether two species are involved. See reference below.) The wingspread is over 16 cm (that’s over 6 inches). This species occurs along the coast in the northern tropics. The individual stayed stayed for a few seconds and then glided away.