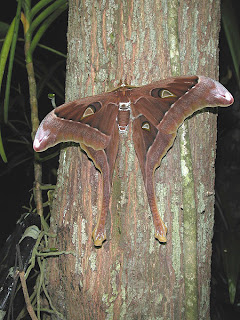 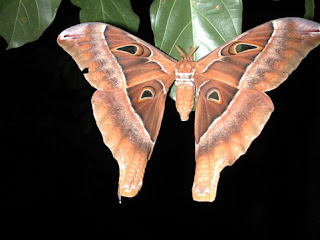 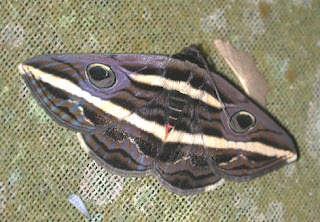 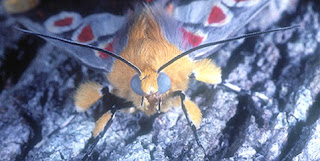 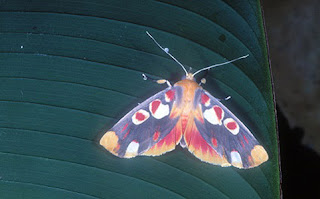 One of the icons of the northeastern Australian rainforests is the Hercules Moth, Coscinocera hercules, one of the world’s largest moths. Females are larger than the males, often attaining more than 20 cm across and have shorter tails. Males are usually darker than the females. These moths seem to be most active on cooler nights. Adults do not feed. They, like many other moths, survive for a few days on fats stored during the caterpillar stage. Males are more commonly found at lights. If they are recognised in the morning, the Butcherbirds finish them off. Females lay about 200+ large eggs on a variety of trees, both native and introduced. Size of the adult moths varies, probably based on the quality of the food they have eaten.


The family Oecophoridae is probably the most diverse family of moths in Australia. The larvae seem to be leaf litter feeders and occur in regions outside of the rainforests. The most common families in the rainforests seem to be the Noctuidae and the Geometridae. The oecophorids are present but in numbers less than encountered elsewhere. Perhaps, that is because leaf litter is more promptly processed in the rainforests. In the eucalypt woodlands where oecophorids predominate, leaf litter is deep and not so quickly processed. Who knows? Donuca rubropicta (Butler) is a beautiful noctuid moth that frequently comes to lights. It seems to combine cryptic, disruptive and startle colour patterns.

Hypsidia moths have been bandied about from the Noctuidae to the Pyralidae but are now placed in the Drepanidae, the Hook—tip moths. H. erythropsalis Rothchild is a common visitor to lights in the Kuranda rainforest. But it really does not have hook-tipped wings! Maybe it is still misplaced in the Drepanidae. But as I have noted previously, though common, it is one of those moths that I have never encountered during the day. It must be distasteful as birds avoid eating the moths from the light sheet.
Posted by Mr. Smiley at 15:03:00

Is that the same Hercules moth that occurs in SE Asia? It's pretty obvious -- is it also distasteful?

hey, nice to see your brilliant blog. I am amazed by your photo of Hypsidia. I have borrowed some specimens of Hypsidia from CSIRO and the Natural History Museum, London, for my student, who works on the phylogeny of Drepanoidea, however, I have never see any live Hypsidia when I visited Australia before. May I ask if this moth is common in your area and how many generations are possibly there overthere?